Kukulcan according to Wikipedia:
Kukulkan ("Plumed Serpent", "Feathered Serpent") is the name of a Maya snake deity that also serves to designate historical persons. The depiction of the feathered serpent deity is present in other cultures of Mesoamerica. Kukulkan is closely related to the god Q'uq'umatz of the K'iche' Maya and to Quetzalcoatl of the Aztecs. Little is known of the mythology of this pre-Columbian deity. 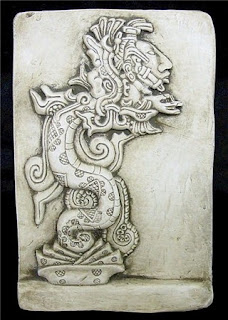 Although heavily Mexicanised, Kukulkan has his origins among the Maya of the Classic Period, when he was known as Waxaklahun Ubah Kan, the War Serpent, and he has been identified as the Postclassic version of the Vision Serpent of Classic Maya art.
The cult of Kukulkan/Quetzalcoatl was the first Mesoamerican religion to transcend the old Classic Period linguistic and ethnic divisions. This cult facilitated communication and peaceful trade among peoples of many different social and ethnic backgrounds. Although the cult was originally centred on the ancient city of Chichén Itzá in the modern Mexican state of Yucatán, it spread as far as the Guatemalan highlands.
In Yucatán, references to the deity Kukulkan are confused by references to a named individual who bore the name of the god. Because of this, the distinction between the two has become blurred. This individual appears to have been a ruler or priest at Chichen Itza, who first appeared around the 10th century. Although Kukulkan was mentioned as a historical person by Maya writers of the 16th century, the earlier 9th century texts at Chichen Itza never identified him as human and artistic representations depicted him as a Vision Serpent entwined around the figures of nobles. At Chichen Itza, Kukulkan is also depicted presiding over sacrifice scenes.
Sizeable temples to Kukulkan are found at archaeological sites throughout the north of the Yucatán Peninsula, such as Chichen Itza, Uxmal and Mayapan.

Is it possible that December 21, 2012, the end of the Mayans long count calendar, marks the date of Kukulcan's return? 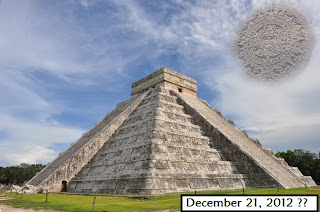 Could the Ancient Mayan Prophecy, and the Mayan 2012 Calendar, be warning us of impending doom on December 21, 2012? There are arguments that “Scientifically” we seem to be going through Global Changes. There are people with this point of view:
“Both birds and fish are extremely sensitive to the Earth's magnetic field orientation. In light of the recent bird die-offs, this seems like the valid culprit. That magnetic field is about to collapse as the Earth goes through one of its periodic N-S magnetic pole reversals. The last reversal happened 780,000 years ago.”
“Unfortunately, during the years that these poles go through this reversal process the Earth is exposed to dangerous plasma blasts (charged particles) from our Sun. The next 11-year Solar Max will occur in late 2012 -- right at the time that our Earth's magnetic field will be at its weakest. It also looks like this next Solar Max will be extremely strong.”
“This gist of all this is to warn you that when Earth gets hit with solar storms in 2012 it will likely short out our global electrical grid systems. It will take years to bring the electrical grid back up after the damage that will be done.”
“Be prepared to live without electricity for several years and make sure you have a secure source of water and food stocked up. Hundred of millions will starve and die during this event, particular in the developed world where we rely heavily on technology and electricity. Primitive rural villages in isolated places like Africa will, conversely, survive this event very well.”
AliensWereHere.com disagrees with this prediction. Here at AliensWereHere.com (The Official Ancient Alien Theory Website) we tend to take the “Optimist” view or prediction of what will happen December 21, 2012. Because we prescribe the fact that Ancient Aliens may have visited and influenced man kinds’ early civilizations, we also believe Aliens may still be watching over us and waiting to make their return known. Here at AliensWereHere.com, we think that the Mayan 2012 Prophecy Date = December 21, 2012, may be the date Extraterrestrials make public contact with human kind. Sharing their advanced knowledge of technology and explaining “Mankinds’ lost History”, to us. As the Ancient Mayans believed, we at AliensWereHere.com, think December 21, 2012 will be a huge turning point in Mankinds’ History and a pivotal point for “Change”. We are not saying there aren’t “Bad” Alien Races out there, but we tend to believe the “Good” Aliens have been watching over us and have helped our early ancestors. This could be the date, most of the universal questions about the universe, history, creation, and our future are answered!
What is your prediction or opinion on what will happen December 21, 2012?