Ancient Aliens Evidence: the Wandjina, Australia, and the Aborigines 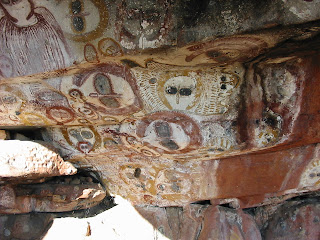 The Wandjina, are another example or evidence supporting Ancient Alien Theory.  Who were the Wandjina:
In Aboriginal mythology, the Wondjina (or Wandjina) were cloud and rain spirits who, during the Dream time, created or influenced the landscape and its inhabitants.[1] When they found the place they would die, they painted their images on cave walls and entered a nearby waterhole. 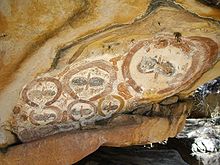 Today, certain Aboriginal people of the Mowanjum tribes repaint the images to ensure the continuity of the Wondjina's presence.[2] Annual repainting in December or January also ensures the arrival of the monsoon rains, according to Mowanjum belief.[3] Repainting has occurred so often that at one site the paint is over 40 layers deep. The painting style evolves during this process: the figures of recent years are stockier and some now possess eyelashes.[4]
The Wondjina paintings have common colors of black, red and yellow on a white background. They appear alone or in groups, vertically or horizontally depending on the dimensions of the rock, and can be depicted with figures and objects like the Rainbow Serpent or yams. Common composition is with large upper bodies and heads that show eyes and nose, but typically no mouth. Two explanations have been given for this: they are so powerful they do not require speech[5] and if they had mouths, the rain would never cease. Around the heads of Wondjina are lines or blocks of color, depicting lightning, clouds or rain. The Wondjina can punish those who break the law with floods, lightning and cyclones.[6] The paintings are still believed to possess these powers and therefore are to be approached and treated respectfully. Each site and painting has a name.
In 2007, graffiti depictions of Wandjina appeared in Perth, Western Australia. Styles ranged from stencil-work to a spray painted Wondjina driving a pink car. Using flickr and blogs, several people engaged in 'Wondjina watching', documenting the Wondjina graffiti they found.[7] These 'wandering Wondjina' angered and upset Aboriginals who said that only certain of their people are permitted to depict the Wondjina.[8] A short film, Who Paintin' Dis Wandjina, discussed the Aboriginal reaction.[9]

Here are illustrations from a book by Lt. Grey. "Journals of Two Expeditions of Discovery in North-West and Western Australia 1837, 1838, & 1839". He led an expedition in the 19th century near the Glenelg River region of Kimberley, Northern Australia where he came across a series of cave paintings.  Aborigines painted these beings in caves and called them the Wandjina. 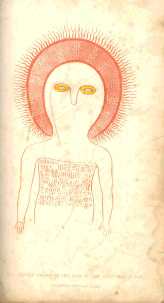 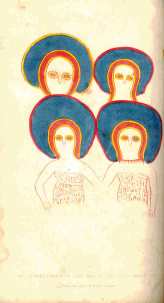 Here are more examples of Wandjina. These a images from Kimberley, Australia. Possibly 5,000 years old. Some people believe they may represent Alien beings. Notice the "alien like" shapes to some of the heads. 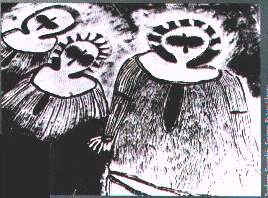 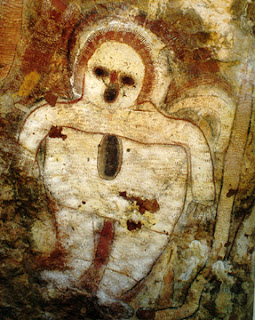 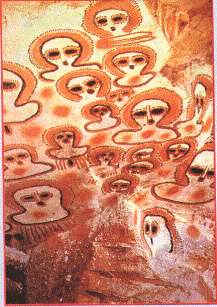